When we visited Paris and saw the “Love Locks Bridge”, we had no idea it would be the last time we’d get the chance to do so. Since our visit, it’s been all over the news how the locks are damaging the bridges (parts of a bridge collapsed from the weight), making things unsafe, and creating more headaches for the locals than they’d bargained for. So, Paris has taken the locks down and decided to replace them (temporarily) with art exhibits until the final glass panels are in place.

The Love Locks are a phenomenon that have swept all over the world where many countries (Germany, South Korea, Russia, China, Serbia, Czech Republic, and Italy – to name a few) now have love locks covering various bridges, fences, and anywhere locks can easily be snapped on and then the lovers throw away the key.

Why did the locks become so popular? 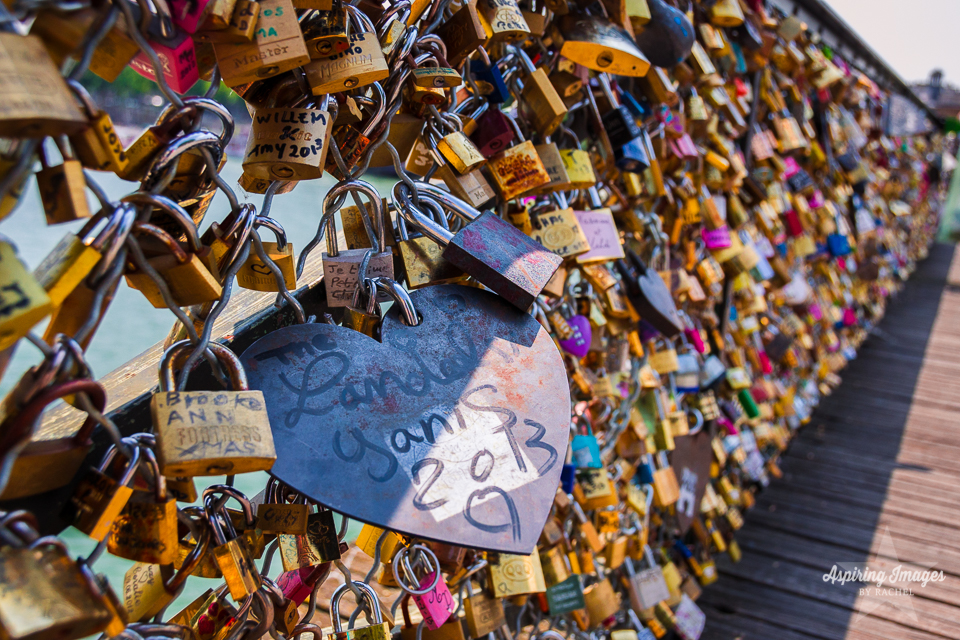 There’s a romantic appeal for the public declaration of your love and dedication to each other. I have to admit it isn’t something I understand since my most public declaration of love was at my own wedding and otherwise my husband and I tend to keep our lovey-doveyness to ourselves. For many though, the idea of writing their names on locks, attaching that love lock to a scenic location like the Ponts des Arts Bridge in Paris and then symbolically throwing away the key into the Seine river was an act of public declaration which would ensure their love would last forever.

Who says romance is dead?

Supposedly the tradition began almost 100 years ago in Serbia where a woman fell in love with an officer. They declared their love for each other but when he went off to war he fell in love with another. She died of a broken heart and women have since flocked to the bridge where the couple used to meet and placed their love locks on the bridge to protect their own relationships. 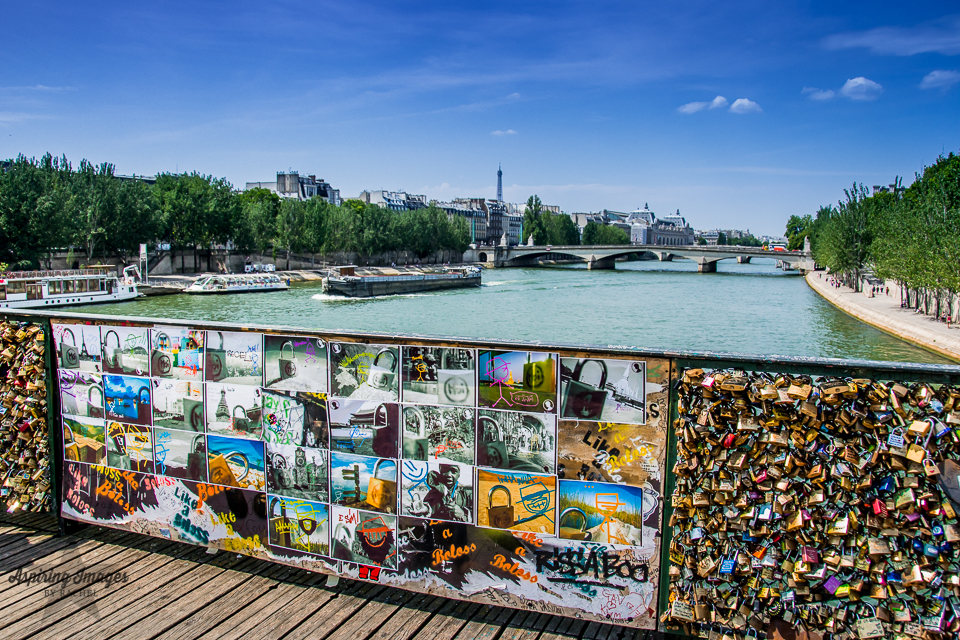 It was very sweet to walk along the bridge and see the names of couples on the locks, imagining them excitedly picking out “their” lock (whether ahead of time or at one of the multiple vendors selling locks nearby), adding their name and message for each other, and then taking the time to pick the forever location where the lock would spend the rest of its days.

As we walked the bridge, there were a few couples adding their locks to the few remaining spaces. It was a bright and hot day with the locks glittering in the sunlight and adding a surreal effect while moving from one end of the bridge to the other. My husband and I did not purchase a lock (remember – we aren’t much for the public lovey doveyness) but I did enjoy getting to walk around and take as many photos as I could.

I’ve read they have now removed the bridge walls by sections, with the locks still intact, to then recycle the locks and replace the walls with all new glass panels.

So, the City of Love’s most recently trending tourist location has undergone a facelift but it’s unlikely those who want to shout their love from the rooftops (or write it in a sharpie on a metal padlock) will be held down for long. I have no doubt that soon enough, a new location in Paris will be selected with a new tradition for couples to share their love with the world. Will it be writing names on heart-shaped rocks and then piling them in front of the Eiffel Tower like a big game of rock landslide jenga? Climbing to the top of the Arc de Triomphe and then throwing paper airplanes from the top with the message of love written inside, to watch them fly around the traffic circle and dodging cars? Or maybe purchasing tiny little gargoyles to paint in whatever colors you want and then give them a home around Notre Dame Cathedral? Yup, all terrible ideas by me which is how you know I am NOT the most creatively romantic person (but if in the unlikely event any of these do become a thing – you read it here first).

The good news is, those who are creative romantics will find a way to express their love again. Look out Paris.

You can buy these prints and more at www.AspiringImagesbyRachel.com