We arrived in Santa Monica, California at night, checked into our hotel, got ourselves settled into the room, and then we crossed the street to visit the Santa Monica Pier. Yup, our hotel was across the street from the beach (jealous?!?). It was late at night and quite cold, for California, so we knew the pier wouldn’t really have a lot of activity going on but I still wanted to visit it and say I’d been there. We walked all the way to the end of the pier and, since everything was closed and it was nighttime, it was hard to deny the true star of the show was the Ferris wheel and its’ mesmerizing and ever changing light show. The Ferris wheel was closed but I knew if it were open I’d still be too chicken to go up there. The idea of the open air and swinging seat – yeah, that’s not my idea of fun at all. Nope. Walking the pier also allowed me to see the famous California beach where the sand goes on and on forever until it finally hits the water. Our beaches in Florida typically are very short from water to shoreline so this was amazing to see. I could see small crowds of people hanging out on the beach and, despite being so far over the water, we could hear someone singing warm-up scales on the beach. The singing was carrying over the water right up to the end of the pier. 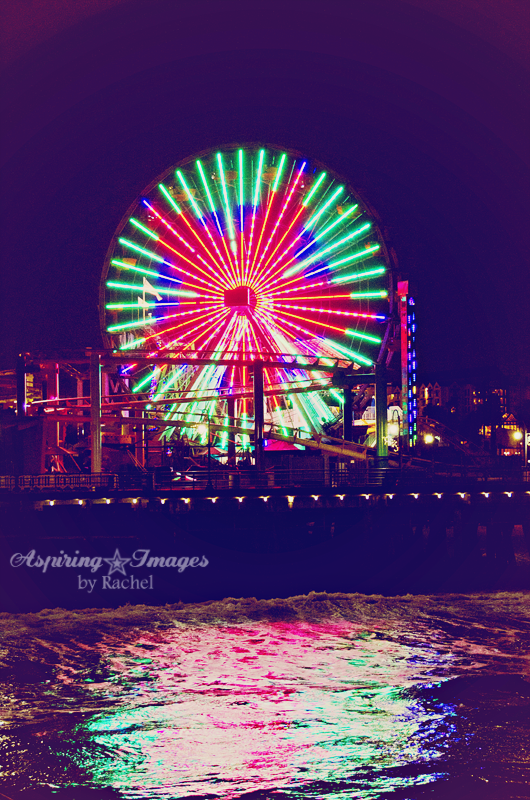 My other favorite was turning the corner to find a guy walking up a set of stairs, upside down, in a hand stand. He had the air of “weirdo” all about him so I tried not to make eye contact (because I have a really really far too strong weirdo magnet) when he was right side up as I knew if I did I’d be sucked into some conversation that wouldn’t be too far from wearing a tin foil hat. I did, however, watch to see if he’d fall down the stairs. No luck.

I was proven right in my avoidance when hand-stand-man chose to “parkour” his way back up the pier by doing pull-ups on awnings, jumping on/over posts, flipping around the boardwalk, and eventually making his way back to the beginning of the pier (while ensuring full t-shirtless viewing along the way). Since there weren’t a lot of people on the pier, he provided quite a bit of entertainment but also managed to get in the way quite often of those of us walking in a straight forward path, like normal people. I did enjoy seeing him run and try to climb up the streetlight pole while waiting for the crosswalk sign to flash. However, he didn’t do anything exciting while actually crossing the street. Bummer.

Look who we ran into

Do you remember what movie Zoltar starred in? What is the best place you’ve found to do nighttime people watching? Are you a wimp, like me, who is too scared to go up in a Ferris wheel? Or am I just a big baby? Any other parkour enthusiasts out there?